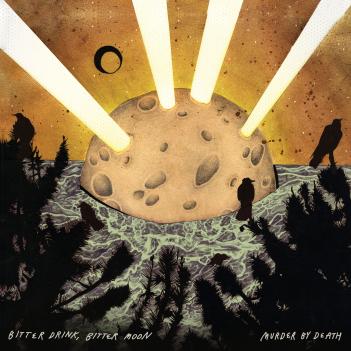 [Originally published at Hypebot in August, 2012.]

Rock band Murder By Death recently achieved the honor of having the third highest funded Kickstarter music campaign after Amanda Palmer and Five Iron Frenzy. Exceeding their $100,000 goal, their final pledge total was $187,048. I spoke with lead singer Adam Turla over the weekend and he shared the details of the campaign.

Murder By Death, based in Bloomington, Indiana, first got together as Little Joe Gould in 2000 and have gone on to release five full length albums and numerous other shorter works on vinyl in addition to CD and digital versions. Along the way Adam Turla took over business management and so decided to run the campaign himself.

For their upcoming release, “Bitter Drink, Bitter Moon,” they decided to use crowdfunding to support the production of a vinyl edition and also to do some things that would deepen their connection with their fans.

Turla explained that they’ve been handling the vinyl releases themselves, even when working with labels on CD and digital releases. They knew from past experience that they had a strong group of fans that would preorder whatever they put out. As you can see from their Kickstarter campaign page, the rewards include such offerings as a Postcard Club, an MBD Book Club plus personal events such as house shows. In addition to being unique, such rewards keep them in direct touch with their more supportive fans.

Murder By Death has always made a point of connecting with their fans including hanging out after shows for pictures and conversation. They strive to show their fans that they care about them and Turla believes that’s evident even from the stage. He feels like the success of the campaign was almost a reward from the fans for that caring.

Budget As Best You Can, Set Prices That Feel Right

I assumed that Turla’s experience with vinyl gave him a real edge over newcomers in budgeting and pricing. But he said that there are always surprises and that sometimes the quotes they received for special items such as the Zoetrope (pic on the campaign page) were less than the final product cost. More importantly, one never really knows which rewards will attract the most attention. That means that it’s hard to predict costs because you don’t know till the end of the campaign which items will take off.

Beyond budgeting as best as one can, Turla also revealed that pricing was not set with a particular margin in mind. There were times when aesthetic choices overran profitable ones and the pricing reflected that. Turla says the final call on pricing came when he posted the rewards on Kickstarter prior to making them public and doing a gut check to see if they felt right. Having contributed to numerous Kickstarter campaigns himself, he knew from his own experience that overpricing items wouldn’t feel right and that sometimes the right price wasn’t the most profitable.

Turn It Into a Game

Murder By Death’s status as the third highest music campaign on Kickstarter came about almost by accident. Turla just happened to check the “Most Funded” categories on Kickstarter on the last day and discovered that they were in striking distance of being third. They immediately notified their fans and he said it became almost like a game for them.

Many chose higher rewards or simply upped their pledges as well as notifying their friends. He says if he’d checked sooner, they might have gone for second place but even so the response from their fans was overwhelming. He didn’t attempt to turn it into a game but fans responded as if it was and that suggests the power of gamificaton when people care about what you’re doing.

Adam Turla’s Advice for Other Bands

Now that they’re Kickstarter heroes, Turla says other bands are asking him for advice. He noted that bands should assume they have only one really big campaign possible, as opposed to crowdfunding multiple times, and that they should work really hard. For his part, it may have been a mistake to do it all on his own (my interpretation not his) especially since the campaign wrapped up as they were heading out on tour.

Having every hour of one’s day devoted to touring, interviews and dealing with the work of a crowdfunding campaign is overwhelming. But even if you’re not going out on tour, recognize that a successful campaign requires a great deal of work. It’s not something that can succeed on its own.

Turla was most moved not by getting a bunch of money but by the personal response from fans. The campaign gave them a reason to reach out and express their feelings about the music of Murder By Death. He says he’s written a huge number of emails in reponse but that it was incredibly gratifying to hear stories of how their music had affected their fans.

Be sure to check out the campaign video above as well as the Kickstarter page. The video, photos and text are all well done and give one a sense of a band that can take care of business without losing their personal touch.