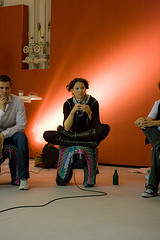 Ethan Mollick provides a reasonable definition of crowdfunding in his draft document, The Dynamics of Crowdfunding: Determinants of Success and Failure (July 25, 2012, p. 5):

“Crowdfunding refers to a variety of different efforts by entrepreneurs – cultural, social, and for-profit – to fund their efforts by drawing on relatively small contributions from a relatively large number of individuals using the internet, without standard financial intermediaries.”

Mollick does not include microfinance which can cover a variety of financial services to micro-entrepreneurs. I consider the lending aspects of microfinance to be one of the four types of crowdfunding.

The Four Types of Crowdfunding

The four current types of crowdfunding are:

Though this approach to categorizing crowdfunding is readily apparent, depending on your definition of crowdfunding, one source that has been widely cited in the press is a recent study from Crowdsourcing.org.

This blog and most discussions of crowdfunding music focus on reward-based crowdfunding. Typically musicians and music-related companies set a funding target and offer various rewards arranged in tiers based on amounts pledged. These rewards usually include whatever is being funded, i.e. a record album on vinyl or tickets to a performance on a tour, in which case crowdfunding becomes a form of presale.

However, rewards are often a heterogeneous mix of the products or events being funded, acknowlegement of support such as listing in album credits and special experiences such as house concerts.

To further complicate matters, supporters will sometimes contribute funds above those required for a particular reward level without expecting additional return. Such actions add a donation element to reward-based crowdfunding.

Of course, if you’re not worried about a strict definition, you probably already recognize that music crowdfunding typically entails musicians or music-related companies funding whatever it is they need to do by collecting funds from a large number of self-selected individuals who are offered rewards for their contributions. Currently this process is facilitated by crowdfunding platforms though some folks will go it alone with hacked together setups or such tools as IgnitionDeck.