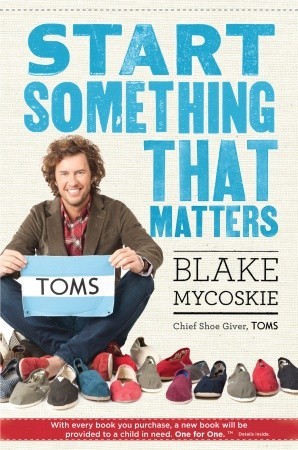 I’m starting to look at issues faced by founders, not just tech founders or even business founders per se, but founders of institutions that are designed to make a difference in the world. That includes arts institution and organizations focused on social change. This emphasis quickly led me to Blake Mycoskie’s Start Something That Matters.

Mycoskie is the founder of TOMS Shoes, which has expanded to include eyewear, and was started with the very cool mission of giving a pair of shoes to a poor kid for every pair of shoes sold.

I’ll be honest, when I got the book I was a bit reluctant to read it. I’m not sure why but I remember being in a grumpy mood when I finally picked it up and started reading. But in the first chapter Mykoskie tells his founder’s tale about traveling in Argentina and how the poor’s lack of shoes and his attraction to a local style of shoe led to the idea to found TOMS.

It’s an inspiring tale, one that reminded me of some of my deepest motivations for becoming involved in the world of business. It’s also an example of the power of an origin tale well told. Given my response, I can see why some founders stoop to make up catchy tales to reel people in. They’re powerful.

But, as I got further into the book, I found it to be somewhat of a duct taped together combination of stories, concepts and supporting material that never quite rose to the level of the opening chapter.

I also discovered in the credits at the end of the book on the last possible page that Mycoskie had a coauthor who is otherwise unacknowledged in the paperback edition I bought.

The two Mycoskie fans with whom I shared that information were rather disappointed to find out that he hid the coauthor information. It’s a move that strongly contrasts with his brand as the founder of TOMS, one that seems a bit dishonest and designed to make him appear to be the sole author.

The Power of Storytelling

In some respects the importance of the founder’s tale can be evaluated by the fact that so many people create false tales to give a specific impression.

But the importance of origin tales, which can arguably be traced back to our cultural roots and religious beliefs, is also related to the power of storytelling. Stories are easier to remember and to relate to than are “facts” and bits of data.

Available on Amazon:
Blake Mycoskie – Start Something That Matters