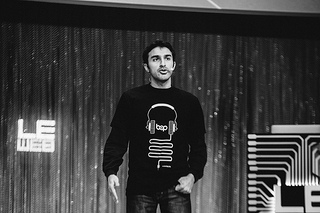 I’ve been rather quiet of late. After having to put DanceLand on hiatus due to an overwhelming job situation, I’ve managed to start scraping together some time to move forward with my writing.

But the first result has less writing than quoting!

It’s an interview with Shehzad Daredia, CEO of Bop.fm. It’s also the first in what will be a series of interviews with startup CEOs on how they learned to do their job.

Given that traditional corporate CEOs typically take the hot seat after many years of grooming, the path of the startup CEO is quite different. Often a couple of people found the startup and one becomes CEO by default. Sometimes that’s what they want and sometimes it’s just what’s needed.

I think we’re off to a good start with the project. Shezhad surprised me with his well thought out approach to finishing college and working a number of startup jobs before finding the right concept and co-founder, Stefan Gomez, and launching Bop.fm.

All that preparation seems to be paying off as you can see from a few milestones included in the article.

But don’t take my word for it. Check it out!

Learning To Be A Startup CEO:
Shehzad Daredia’s “Incremental Path To Entrepreneurship”